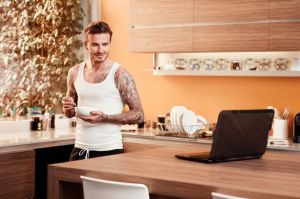 The other morning, I was cycling round the Elephant and Castle roundabout, I looked up at the billboard of our hero David Beckham.  A man more famous than he could have ever dreamed, so famous in fact that he is advertising Sky TV (ok maybe not a career high for him). Firstly I was a shocked to see him fully clothed, being used to seeing him just in pants on the side of the number 8 bus, but then I was shocked by the amount of tattoo’s he now has. His sleeves make him look well ‘ard. And it got me thinking, I know for a lot of people around my age they worry about how work might react if they got some body art. I really love tattoos and I know I’d certainly have more if I didn’t have to worry about work and I work in television, one of the most relaxed industries in terms of how we dress and present oursleves. But I do feel there is a stigma attached to tattooed people amongst certain circles, even though respected celebrities such as The Beckhams, Angelina Jolie and Robbie Williams have many of them, even Samantha Cameron has a small tattoo on her foot! We would surely never ask these people to cover up their tattoos, so why do some people feel they have to?

I only have one very small tattoo on the back of my neck, I got this when I was 21 when I came home from university.  I excitedly showed my mum and she instantly took to her bed, now for anyone who knows my mum she can air on the side of dramatic at times, but I still thought this was a huge over reaction. “But only sailors have tattoos”, was her reasoning as she locked herself in her bedroom for the rest of the afternoon, the same 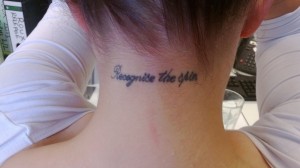 reaction that my brother got when she caught him smoking as a teenager. “But it has meaning”, I explained to her. Trying to get her to understand that it was a symbol of everything I stand for, sadly to no avail. “You won’t be able to get a job!”.  I do have a job it’s ok and my tattoo is so small you wouldn’t know I had it unless you were standing directly behind me. I felt slightly disappointed, this was something I thought was quite special and personal but she didn’t understand, thinking I was now a different person somehow.

Tattooing is something that has been practised in various forms for centuries. For some tribal communities this is a sign of their identity, they can mark rites of passage or alert people of crimes someone has committed. In Europe the wave of modern tattooing was originally brought about by maritime expeditions, so my mum wasn’t wrong when she said that sailors have tattoos! For a lot of people tattoo’s represent something meaningful in their lives, whether it’s an experience, philosophy or representation of a loved one, these permanent marks can be very precious to their owners. It can be an identity.

I think maybe people think it’s a bit aggressive; the idea of having something etched on your skin forever shows that you are whole heartedly committing to it and you can take a considerable amount of pain, especially if you’re someone with sleeves or large tattoos.  But the most common comment I’ve encounter is “what will that look like when they’re old and wrinkly”, but that isn’t what getting a tattoo is about is it, making you more appealing to a youthful audience? Most people I know with tattoos have got them for very personal reasons and are things that are important to them, even if they think it might look good as well. Even if we are a generation of old people with ink, isn’t that cool? A sign of our generation? So along as you get a tattoo you’ve thought through and is something that is meaningful why worry about what it might look like when your old because actually, is looking old and wrinkly a problem anyway? We all age, I don’t think people should have to hide their personality. I think it shows people have lived, a talking point about their journey along life.

Now I know what you’re thinking, some people have ill thought through tattoos, the remnants of a drunken night or a childish idea. But let’s give them a break, they have to live with it for the rest of their lives so why worry about it? It’s not going to make them lazy employee or a dangerous person. For me tattoos are a sign of our generation, a fashion trend which we will carry with us into our older years. They are personal, permanent and controversial. It is a bold decision to get one but I kind of admire that sort of commitment in a person. If someone chooses to get a tattoo, really what’s it got to do with you?

2 thoughts on “What’s it got tattoo with you?”