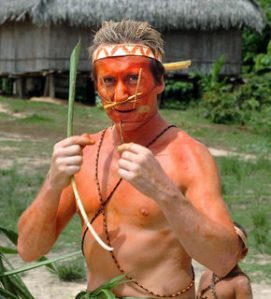 This week four years ago you would have been able to see me on the telly living with a tribe.  Anyone who has spent more than a few minutes with me will know all about this. I’m that annoying person who will casually throw in anecdotes about my misadventures on the mountain plateau like its no biggy. Like the time I mistakenly spooned a goat carcass in the middle of the night or not brushing my teeth for a whole month. I thought it might be time to write down some of my thoughts about Tribal Wives series 2, episode 1 before it becomes a distant listing in an old television guide. Here is some of the bits you didn’t get to see in the BBC programme.

The application process was simple enough, at the time I was working as a receptionist and was really keen to get some more experience in a TV production. The Tribe with Bruce Parry was one of my favourite shows and when it’s sister programme Tribal Wives was aired I was hooked. I put together a long email to the production company asking if they would consider me for a runner role on their next series. They told me there wasn’t any positions for anyone at my level but they were looking for people to take part on-screen and if I was interested I should fill out an application form. Oh yes I was! Ever the show off and exhibitionist, to me this would be better than working on the show, I would be able to experience it first-hand. I filled out my form and got a phone call within an hour from their researchers. I snuck out of my office and excitedly told them everything I could about myself.

They asked me questions like; would you get a tattoo if it was part of the tribal culture? Of course I would! Would you take hallucinogenic drugs if this was part of their ritual? When in Rome! Would be comfortable not wearing many clothes if you were being filmed? Perfect, I prefer being naked! Tell us about your family … right I see where this is going. I told them the truth about my mum’s illness and I guess that was enough to catch their attentions. The next thing I know I’m doing a screen test, then the executive producer is at my house, it was all beginning to seem real. I remember lying awake at night praying that I would be able to go on the show. My personal life had hit somewhat of a dead end, I was heartbroken, poor and becoming fed up of feeling like I was going nowhere. In my mind’s eye this would unleash some sort of survival spirit within me, I would rule my jungle, desert or rainforest – whichever terrain they’d place me in. Strong, powerful, breaking down gender boundaries at every turn. I would be a hero like Bruce, oh how little did I know about women’s roles in tribal communities!

I got the phone call to say I’d been accepted in the morning, I was lying in bed after a late shift at the pub and just lay there very still for quite a while trying to take it all in. But there was one catch, I wasn’t going to be told where I was going until I got to the airport. I sent in my passport and had countless vaccinations. All I knew was I was meeting at Heathrow terminal 3 and that I needed to take clothes with long sleeves. I was absolutely convinced I was going to the amazon, I needed long sleeves so the insects didn’t bite right?  Having never left the Europe I was beside myself with excitement. My friends were googling where flights from this terminal were going, we’d come to the conclusions that I was taking a connection to somewhere in Asia but I was still hoping it would somehow get me to the amazon.

I arrived at the airport early, my taxi had made record time and I sat on the floor with my bag very still, to be honest I was

pooing my pants. Maybe I wasn’t as brave as I thought I was? When the team arrived I was given a sheet of information about where we were going. Turkey … but are there even tribes in Turkey? All I could think is that my friend was going on holiday to Turkey with her boyfriend around the same time as I was going there. I promised everyone back home that I would be spending the month running round in the outer reaches of our earth and I’m boarding the same plane as these people going on a package holiday. Shows how much I knew as there certainly is tribes in Turky, I was to stay with the Gok family of the Yoruk people. They are nomadic Muslims who move around the mountains in the south east near the border of Syria. Their community is 2,000 strong and is constantly under threat from the Turkish government who want them to settle. It all felt very surreal, I had no idea what to expect. On the plane they played the movie ‘The Yes Man’ with Jim Carey. All I remember was I was glad to be sitting down as I may have fainted if I had to stand up, I was shaking quite a lot and I tried to crack jokes to the production team to show I wasn’t scared. Conclusion – I’m not funny when I’m scared, I come across more sarcastic and a little bit weird. I remember really wanting these guys to like me.

After landing in Istanbul we took a connection to Konya where we would stay the night before going on a long journey by car to the mountains. I’d brought Harry Potter and the Goblet of Fire with me to read for a little bit of escapism, and that night I got really pissed off with Ron and Hermione – why can’t they just get long? It was morning too soon and I forced down an egg or two. It was time to get back on the road. I had a teddy bear with me, a beany dog called Woof, I’d left him in my hotel room and to my embarrassment the person who was cleaning my room ran out whilst we were having a team photo to give it back to me. I mumbled something about my mum wanting me to have it and I slipped it into my backpack promising I would never leave Woof behind again. That day was boiling hot, I didn’t do a wee all day.  We stopped for a spot of lunch on the road and I was told this was my last opportunity to call home and I was allowed to let them know where I was. No answer from either Mum or Dad. Shit. I left them messages which they would later tell where really mardy. I was Kevin from Harry Enfield. 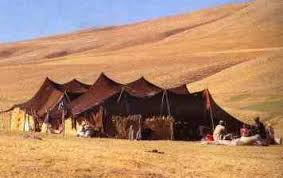 We traveled higher and higher up rocky roads, the views were pretty spectacular. After hours the car stopped and I was told to simply get out and walk over the top of the mountain ridge. So I did, the first thing I saw was a man in a suit. A suit! The elder of my tribe is wearing a suit!! So in I went to the tent that would sleep nine of us, I introduced myself and got stuck in. From this moment you will have been able to see some of my tribal adventures on the documentary but there were a few bits that were missed out. There are many tales of my time there. With a community of 60 goats, 9 humans, 4 dogs, 3 camels and a cat, there was many adventures to be had.

That night I woke up in the middle of the night to the sound of wolves howling as they circled our tribal campsite trying to pick off one of our goats. Any fear I’d had before this was a distance memory, I was absolutely terrified. I had a vivid dream of a wolf getting into our tent and dragging me out into the moonlight and being surrounded by a pack of wolves. I woke up crying, I was such a wet blanket. Standard city girl afraid of a bit of nature? How on earth was I going to deal with the next month?