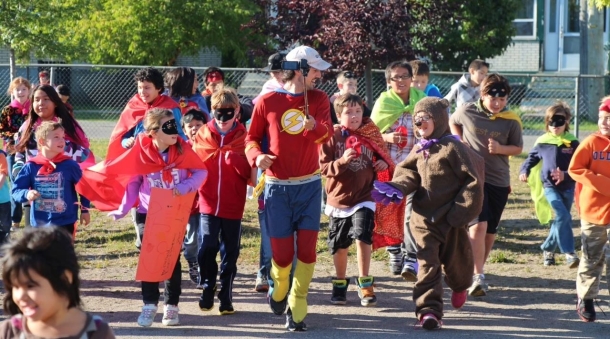 I first read about Jamie when I was on my morning commute to work. It was winter and I was feeling slightly grumpy about the busy rush hour commute on the tube. But I picked up the newspaper, read about what Jamie was doing, and couldn’t feel hard done by any more. Because this man was running the entire width of Canada. On his own. Dubbed the British Forest Gump, I just knew I had to speak to this guy.

After 5,000 miles, 275 days of running and over £200,000 raised for children’s charities including Great Ormond Street and the Pied Piper Appeal, I got a reply from him. I was immediately impressed, his email signature reads “Fundraising Adventurer”. How’s that for a job title? Luckily I’ve caught him between adventures and we manage a video call whilst he’s relaxing at home with his family. “I’m so bloody normal Charlie” he repeats to me on a few occasions during our chat. But I guess I’ll let you decide for yourselves.

So the adventures began in a Gloucester. Up until the age of nine Jamie suffered from a rare spinal condition known as syringomyelia which at times left him hospital bound and even took him out of school for a year. “I remember my Mum, Dad, family and friends looking horrified all the time.” But after a long struggle his symptoms started easing and he began moving freely. With a passion for tennis Jamie began to defy the odds and prove the doctors who feared he would be in a wheel chair for the rest of his life wrong.

When I ask him what was it like growing up in Gloucester he simply replies “It was awesome.” Summer days were spent searching for adders with his older brother round train tracks at the back of their suburban home.
Being the class clown and a bit of a trouble maker, academia was never going to be the path for Jamie. Leaving school at 16 he began working as a tennis coach and shelf-stacker at the local Asada. He earned enough cash to go do a bit of backpacking but upon returning he decided to do the sensible thing.

“I wanted to get a big whack of money together to buy a house, but the only reason I wanted this was because everyone else seemed to be doing it”. A few years down the line the day came when Jamie was meant to sign the mortgage agreement for his very first place, “You know when you get a sick feeling in your stomach, it just dawned on me I didn’t want this house. This is the last thing I want”.

Whilst saving up this money Jamie saw a transition in both his parents. His father, a bricklayer all his life, decided he didn’t want to work just to pay the bills anymore and became a mental health worker. And his mother took the leap to start fostering with Jamie’s dad, something she had wanted to do all her life. These actions rang true to Jamie, and he subconsciously also made a decision to make life count. 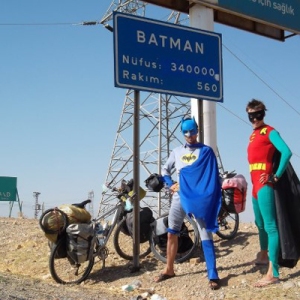 So with £20,000 in his pocket he decided to reflect on his life. He remembers calling the hospital that looked after him when he was younger not really knowing why, but wanting to find out about the work they do. He
brought a £50 second hand bike from the local newspaper and flew out to Bangkok with the plan to cycle all the way back to the Gloucester to raise money for those hospitals. “I hadn’t even tried the bike out at home I just flew it with me to Thailand hoping it was going to work.” His maiden voyage however did not get off to a good start

“On the first day a nut came off the bike and it dawned on me I didn’t know how to fix it.” He locked himself in a hotel room for a day vomiting, having what he describes as “a complete melt down”.

As I’m beginning to learn, with Jamie he doesn’t over think things. He’ll admit that he isn’t a planner which can mean some route changing along the way. Sometimes these detours took him thousands of miles off route. But ever positive he eventually taught himself to read maps he brought along the way “That was the beauty of it, it didn’t need to be planned, it was what it was”

Over the following months Jamie would experience breath taking views and see things he was never expecting.  Finding himself in a conflict zone on the Afghanistan boarder, our adventurer was shot at as the lights were
seen from his video camera as he tried to capture what was happening. Throughout his travels Jamie has always made videos to document his experiences. “I was uploading videos to youtube and didn’t think anyone was watching. Genuinely thought people might have been accidently clicking on my links.” But they were watching, and the 14,000 mile cycle had not gone unnoticed. His cousin Kev Brady even cycled part of the way with him turning up in a Turkish town called ‘Batman’ the pair cycled together dressed up as Batman and Robin. Jamie’s kindred spirit has gone on to paddle The Mississippi to raise money for children’s hospitals as well. 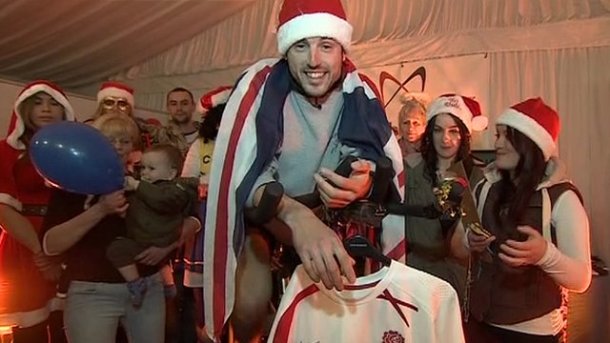 Whilst battling South East Asia, Middle East and Europe Jamie came up with another fund raising plan. Being overwhelmed by the kindness and generosity of strangers he met he decided he wanted to keep doing challenges. He’d be cycling again but this time it would be a little closer to home. He would go for the static bike World Record in his home town, “by this point I thought I was hard as nails so now’s the time to do it.” Within a week of returning everyone had started chipping in to help out and set up the event in a marque on Gloucester docks. A team of people formed to help including; a strength and conditioning specialist, nutritionist and psychologist. “Everyone in that group came in as stranger working for completely nothing and we’ve built this community”

After 268 hours Jamie had done it. He peed and ate on the bike, only stopping for allotted sleep breaks and to take a number 2. His sleeping time per day was 1h30 at best and Jamie admits there was a bit of swearing when he was woken up but the people around him kept him going. “For a big town it suddenly felt small and it was really inspirational that everyone came together”.

So, you know how it goes when you’ve been travelling, you return home and something doesn’t feel right, you’re itching to get back out there again. So Jamie did something a bit more sensible and applied for a Canadian working visa. But no, that seemed too easy. After hearing about amputee Terry Fox’s attempt in 1981, the challenge of running the width of Canada was set. “Everyone was telling me ‘you’re going to die, without a doubt you’re going to die’”. And I can’t say I blame them. His tales of this trip include sleeping rough in minus temperatures, seeking shelters in public toilets “I really like public toilets as they have hand drivers which keep your hands warm”, and even at one point being beaten up and mugged. But these were the exceptions; people often took him in for the night, providing welcome food and warmth. “I’d walk in as a stranger and walk out as a friend. I’d always look for the houses that looked warmer”. 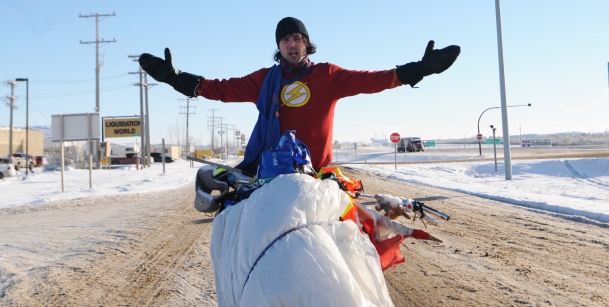 Dressed as comic book superhero The Flash, Jamie slowly began whipping up a frenzy with each town he went through. He began running with 30kg in his back, which he later swapped for a pram to hold his kit. Running the equivalent of 200 marathons he was overwhelmed by the support of local people. “I kept picking up injuries but I knew I didn’t have time to stop, the pain just started to disappear” Jamie knew that the fundraising all comes in at the end of this sort of thing, so he just kept running. He stopped at schools and met so many people that the thought of letting them down was unbearable. “Sometimes I was running crying my eyes out, but if you took me back to that point again I would always carry on”. People found out his shoe size and would turn up on the side of the street with trainers for him.

“All the mothers rang round the local news and spread the word about my run”, all the publicity happened organically in Canada and Jamie had his team of people back in the UK who had supported him since the static bike challenge. After the treacherous terrain of the Rockies, where Jamie was told countless times he was risking his life, he finally found himself at the Pacific Ocean. Jamie was now a record breaker, being the only person ever to have run the entire route.  He returned to Gloucester to a hero’s welcome being awarded the Medallion of the City of Gloucester, which for him marked the finish of his epic journey. He laughs “I can now heard sheep through the city centre!”

Jamie has defied physical, emotional and social boundaries all before reaching the age of 27. He tells me he’s constantly being asked “what’s next?”, but at this point he’s keeping his lips tightly closed. As with any good super hero, he’s good at keeping secrets. For now it’s time to relax and have a few pints with his friends.

So there you have it, whether to you he’s The Flash, Forest Gump or just plain old Jamie McDonald from Gloucester, I’m sure we can all agree that he  is a lot more than, ‘just bloody normal’.

“I think it’s really important to understand that you might fail. Once you’ve accepted that, you know that you can give it all you’ve got.”

To keep up with Jamie’s escapades you can follow him on twitter and facebook . There is also some great footage from his adventure on his youtube channel, and of course the official website created by his organically formed band of merry men. 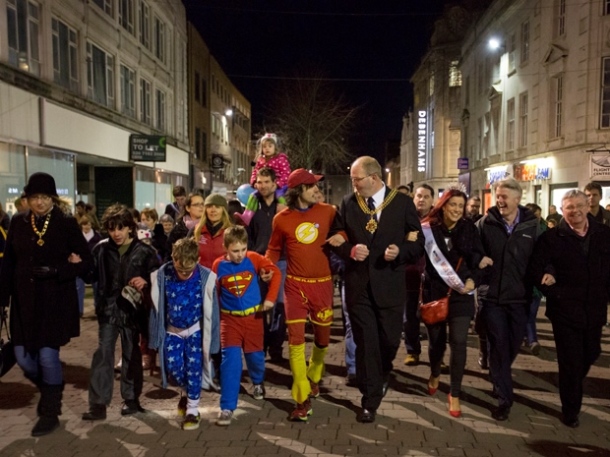