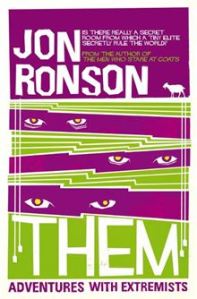 Journalist, broadcaster and culture buff Jon Ronson describes Them as the first time he really found his voice, the book published in 2001 was born out of a Channel 4 documentary called Tottenham Ayatollah. This was where he spent a year with Omar Bakri Mohammed the Islamic militant who features in the first chapter of this bizarre snap shot biography. Ronson spent several years spending time with different kinds of extremist, who where all determined that the world was being controlled by some kind of secret organisation; Bilderbergers, New World Order, Illuminati or 12 foot lizards … This was a brave mission for the Cardiff born Jew as he tackles a whole host of anti-Semitic feeling central to all of these conspiracy theorist groups. We delve into the world of theories and codes, where everyone is under the impression that the wool is being pulled over the eyes of the general public.

Faux naifery is now a common tactic used by writers and broadcasters alike to gain the trust of weird and wonderful interviewees; this is something Louis Theroux has made his name by. Ronson plays his part well, often questioning and adding his opinion only in a bid to find out the why’s to what seems to a normal person as extreme behaviour. There are times when your unsure if his naifery is even faux, as the situations he finds himself in become stranger and stranger. You become very found of him as the book progresses, a quote that seems to sum him up “I am essentially a humorous journalist, I am a humorous journalist out of my depth.” This makes the subject matter further more engaging, as Ronson gets himself into weirder and weirder situations, you aware that his portrayal is authentic to how he is experiencing it. There is little historical background, merely a brief introduction to each chapter so you really feel like your discovering these sub cultures along with him.

Ronson’s portrayal of some very dangerous and feared figures is very human. A lot of the individuals and the characters Ronson portrays aren’t new to the public, their stories have been told by the media on many occasions however their personalities hadn’t before had a chance to come through in the same way. There are many incidents when the reader find itself rolling it’s eyes or having a little chuckle at the down right stupidity of some of the schemes and ideas they have cooked up. Particularly the chapter involving Klu Klux Clan members erecting a cross to burn that they were unable to light, shortly after a discussion about whether their robes are machine washable. This style of writing is never going to win any awards for affluence; his research is almost purely field and first hand experience. However this adds a short of charm to the text, a humanity that is often lost when dealing with such big issues.

At the end of the book however the ever cool Ronson looses his patience after he manages to penetrate Bohemian Grove (San Francisco based men’s club that holds an annual gathering of the some of the worlds most powerful men that famously is know to burn effigies of owls) having seen what he describes as basically a weird frat party for rich men who simply haven’t grown up. The conversation with conspiracy theorist Alex Jones takes a heated twist when Ronson fails to see the codes and underlying messages of the evening’s performance. This is a relief to the reader, as by this point you are willing him to take a stand and speak out to his companions.

This book leaves you scratching your head, there are no out and out conclusions on the issues raised just simply snap shots of times in each of these peoples lives.  Vanity is a common theme throughout, even a member of the so called Bilderberg group admits that he quite likes the idea that people think they are controlling the world. There are moments of jaw dropping terror when your reminded of the devastation militant action can bring, coming from both the government in the case of The Weaver Family and the extremists. There are times when you really have to remind yourself that the person your reading about, although is being made a fool out of by international press and you feel momentarily sorry for, is an extremist, white supremacist or Islamic fundamentalist. For people who are interested in learning a little bit more about the big players in the conspiracy theorist boom of the late 90’ s/ early naughty’s this book is for you, for those of you who are seeking answers it isn’t. 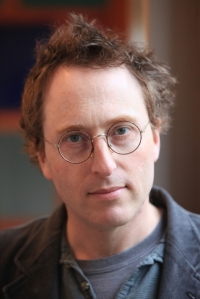