You must have been sat at home with a blind fold and ear muffs on for the last month, not to have heard the critical acclaim this film has received. With nominations for 12 Oscars, there is no getting away from the fact that this film has been tremendously well received, so going into the cinema, on a rainy Monday afternoon, I had high expectations. And met they were, but it was not the film I was expecting it to be.

We join Abraham Lincoln (Daniel Day-Lewis) during his second term in office, after years civil war, many young men have lost their lives and whilst trying to bring an end to the blood shed the president is trying to push forward the congress vote, for the now famous, 13th amendment. The abolishment of slavery, a controversial decision at the time must happen before the civil war is draws to a close and leaves Lincoln with some difficult negotiating and compromises to make.

From the moment the film began I was transported to another time, the dark shadows of the council chambers where all too real, painting a picture of presidential life far removed from the presidency images we normally get from Hollywood. During the first half hour of the film a battle scene depicting the cruel realties of the civil war paints a harrowing picture, littered through the film are reminders of the high death toll this war had, soldiers bodies piled high.  Spielberg creates two separate worlds sharpely contrasting each other, that of the field of war and the life of a politician locked away dark wood panelled rooms. The sets become characters; shadows are embraced rather than avoided. The art work and costume department do a sterling job, transforming well-known actors in to mutton chopped men of the 1800’s.

Day-Lewis’ Lincoln is a softly spoken, thoughtful and authoritative, yet immensely likeable. Famous for his method acting he has once again delved deep into the psyche of the character. Physically he has transformed everything from his bow legged walk to each flicker of the eye, movement for Day-Lewis is always deliberate. Sharing anecdotes amongst his chambers and seemingly being a man in complete control, even in the face of some controversial decisions.  Set pieces, however, are where I most enjoy seeing him, taking a hand written speech out of his top hat during a flag raising ceremony brought a wide smile to my face and delivering public speeches that ooze kindness.

Sally Field offers up a wonderful performance as Mary Todd Lincoln, playing out the heart wrenching up and downs of a woman who has lost a son. The relationship between her and Day-Lewis is a heart-breaking, tender and honest. In this role she shows a myriad of emotions from being the tough public face of the president’s wife to a grieving mother on the verge of hospitalisation for her mental health. Joseph Gordon-Levitt plays their oldest son (Robert) determined to join in with the war efforts before it’s too late. Both Mary and Robert can rattle the otherwise calm Lincoln, offering up an authenticity to the presidents family life. 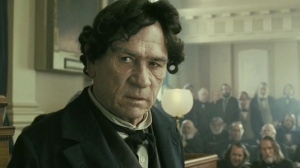 Although everyone is talking about Daniel Day Lewis’ marvellous performance in this film, the stand out for me was Tommy Lee Jones. His depiction of radical Republican Thaddeus Stevens was extremely moving and even found myself crying during a couple of scenes. Grizzly, aggressive and stubborn Stevens is a loner seemingly fighting his own battle for equality, a revelation in the final scene makes clear the reason for Lee Jones’, brilliantly acted, cloaked venerability. At the end of the film this was the character I was left wanting more of. And, of course, wanting to buy myself a top hat.