Marks and Spencer’s have always supported British tradition, they are this country’s most well-known high street brand and are the very epitome of our countries conservative middle classes. From their championing of royals to Tory support, you’d be right to raise an eye brow when finding out that the company is being criticised for putting Islamic values ahead British tradition. It all happened a few days before Christmas in a London branch. A customer went to purchase a bottle of champagne but was asked to go to another till as the checkout attendant was Muslim, therefore was allowed to request not to serve alcohol. This made national news with The Telegraph reporting the incident.

Alcohol and pork is forbidden in Islam and some Muslims do not feel comfortable even handling these products. With other supermarket giants such as Tesco and Sainsbury not allowing their Muslim staff these privileges it would seem that M&S was waving the liberal flag all on its own. However that is not the case, Morrison’s, in Bradford where there is a large Muslim community, said it had widespread experience of dealing with the issue and would “respect and work around anyone’s wishes not to handle specific products for religious or cultural reasons”. The M&S branch in question is in London, also a thriving diverse community. So what’s the problem with the popular food hall also adopting this approach?

Away from the sensationalism of the national press I was surprised at the uproar from members of the public. M&S is such a popular retailer I would imagine it would take quite a lot to turn its loyal shoppers against it. Since the story broke facebook groups have begun popping up calling for a boycott of the store. So close to Christmas thousands of shoppers held the power and hitting the headlines has meant M&S reputation was a stake.

“So employees can refuse to serve customers buying pork and alcohol. Is this some kind of a joke? I will never spend another penny here again” spits one of the boycott M&S facebook group.

Creators of these groups believe that they are being discriminated against by not being served by a particular member of staff and that this decision is akin to Catholic workers refusing to serve homosexuals. I beg to differ. Discrimination by definition is the unjust treatment of a person or group due to their race, sexuality or beliefs. Forcing someone to handle alcohol against their will can no way be seen as them discriminating against you, they are not preventing you from buying it or consuming it. However not refusing to serve someone because of their sexuality is completely different, serving someone food has nothing to do with sex or sexual preference. The only thing I could think of as comparable would be to ask a catholic to engage some kind of sexual contact with someone of the same sex. Even writing that seems ludicrous but hopefully you can see the point I’m trying to make. 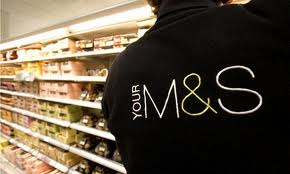 Marks buckled to the pressure and a few days later releasing an apology. So controversial was this denied transaction it has even made American news with Fox is even reporting the story. I can’t help but feel slightly let down. M&S have said that employees that feel uncomfortable handling these products will no longer be allowed to work on tills. The customers, in my opinion have bullied a change in attitude towards these members of staff. Fox described the rising Islamic population in the UK as a ‘fiery problem’ since the terrorist attacks of 7/7, the murder of Lee Rigby and the rise of the EDL. Even though I don’t expect much from Fox, I feel disappointed that this isolated incident has given excuse for statements likes this, none of those things represent the peaceful religion of Islam. How long will it take for us to disassociate Muslims with extremism? They are not the same thing. Pointing out the obvious here, I must also add that Islam is not the only religion with moral guidelines and food laws.

M&S is urged by boycotters to not get involved with religion and put customer service first. It is a concern to people that if something like this is accepted it opens up a can of worms and has left shoppers asking “What next?” I’m so bored of this response to anything that slightly changes the norm, especially something that represents multicultural evolution. Where is the acceptance and empathy for each other, something that in such a consumer centric country we forget so often.

We live in a world where the customers are always right, with social networking we are able to whip up a frenzy within a minute of something happening. Things can escalate to extremes and cases such as this can spark negative feeling to minority groups, which is something that I feel particularly strongly about. Must the Muslim community be constantly under scrutiny?  In the grand scheme of things is it really so much trouble to move to another check out? We would never expect an under 18 to be able to sells alcohol because in our culture we see that as wrong. For some Muslims selling alcohol and pork is morally wrong, so why should we expect them to be forced to sell these items or banished to another part of the store. It only takes a sign and a moment to move tills. Those people so angry over ‘customer service’ probably need the few minutes it takes to move to another till to think about how ridiculous they are being.

I urge M&S to grow some balls because sometimes the customer isn’t always right.

2 thoughts on “Boycotting for Booze”