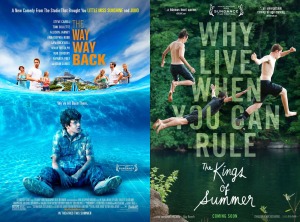 9 times out of 10 I despair at our society’s obsession with youth. I’m pro age, I like seeking advice from older people and enjoy learning through the eyes of the mature. From popstars, reality stars to models, there are so many young people we give so much attention to.

But over the past year my two favourite films have been American teen coming of age flicks. After consideration I realise I’m always drawn to a coming of age film. For anybody, like me, who loves watching character driven drama and a bit of angst, this sort of movie that, if done right, will certainly whet your appetite. It is an opportunity for directors and screen writers to really test themselves, to play with words and actions that if portrayed by grown-ups just wouldn’t make sense. The Kings of Summer and The Way, Way Back are both in my opinion important reminders of juvenile  courage and straight forward gumption.

The Kings of Summer is a movie for anyone who’s ever attempted to build a den, which lets admit it is most of us. What I think 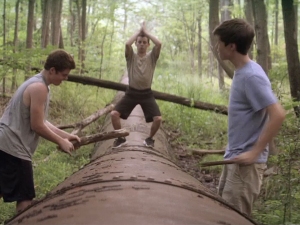 makes this film special is that the adult characters are so strong along with some very talented young actors. Our lead is Joe (Nick Robinson) a frustrated teenager living in an Ohio suburb with his father (Nick Offerman), both struggling after the death of his mother. Their relationship is strained and the dry exchange of dark humour is immediate and hilarious. His best friend Patrick (Gabriel Basso) is struggling with the opposite problem with cringe worthy smothering parents (Megan Mullally and Marc Evan Jackson ). The parental scenes of this movie are very funny and almost make you wish they were the central characters. The unhappy teenagers however take the lead and do what every boy seeking his independence does, they build a den. But not just any den, it’s a shack in the woods of epic proportions.  Oddball Biaggio is along for the ride after stumbling upon the woodland area with Joe. His comic relief picks up on the stride left by the genius comic acting by the parents, with hilarious lines like “I can read. I just can’t cry”. The relationship between the boys is tested by the all important ‘girl’, but it’s sure to be a summer to remember. Living off the land and becoming men lends space for the writers to play with the idea of manhood, along with a nice dollop of angst. There is a beautiful scene were the three teenagers beat out a rhythm and dance on an exposed drain pipe in the woodland, reminding us that they are not so far away from civilization but at the same time full of the sort of wild abandonment you can only feel the first time your left to your own devises. Kings doffs its cap to the classic coming of age film Stand By Me giving you the same sense of adventure and escapism. This first feature by director Jordan Vogt-Roberts debuted at Sundance film festival to rave reviews and quite rightly so. 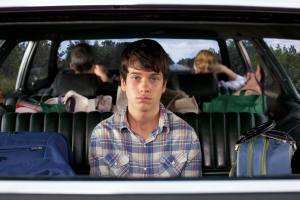 Following in a somewhat similar vein is The Way, Way Back. The title references to the back seat of a station wagon were our lead character travels in the family car, looking like a grumpy man-boy. We join teenager Duncan (Liam James) as he embarks on a summer trip with his step family lead buy his ‘grown-up jock’ stepfather Trent (Steve Carell). The tone of the piece is set in the opening scene when Tent asks Duncan to rate himself out of 10, after reluctantly answering a 6 he is corrected and told he is a 3. Trent is a familiar and believable villain and we are rooting for Duncan all the way. Duncan’s mother Pam is played marvelously by Toni Collette, a divorcee who is so happy to have found a new love she can’t see Trent bullying her son. The family arrives at Trent’s summer house in Massachusetts seaside town dubbed as ‘spring break for adults’, Duncan is a fish out of water. We watch him get a summer job at a water park, with the help of his unlikely new friend Owen (Sam Rockwell). He becomes part of an extended family of misfits at Water Whizz.  Rockwell brings the film into a different gear with perfect comical timing, cheesy lines like ‘thanks for the memories’ and ‘you need to go your own way’ transforms pop lyrics to hilarious one-liners. What sets this aside from the 2009 summer job flick Adventureland is that it doesn’t try to be cool. The awkwardness feels authentic and it doesn’t lean on sex or drugs to get across the idea of the teenage characters ‘finding themselves’ so to speak. All this behaviour is left to the adults in this instance. And in what other film would you have the jeopardy of trying to find out whether it’s possible to pass someone on a water slide? A question I’d often pondered as a teenager. This is a fine directorial debut from The Descendants writers, Jim Rash and Nat Faxon.

These films have received criticisms for over explaining their meaning and sometimes moving quickly between emotions. But in my opinion wasn’t that what it felt like being a teenager? When you’re with your best friends you can go from tears to hysterical laughter in a split second. You’re constantly try to find meaning in everything you do. It’s the only time in your life where you have time to brood and you love your friends so fiercely that the slightest imbalance in the relationship can be catastrophic. Your teenage years with all its angst and change can sometimes throw up moments of pure clarity. These moments of pure clarity, I believe are what makes us the adults we become. The first moment you make a decision to stand up for what you believe in is a special one.

I urge you to sit pyjama clad this January watching these films on DVD, they will take you away from work stress and the bleak winter. You will be transported to those hot summers of your childhood and all the possibilities you realised after you found your voice. It does us all some good to remember who we once were, before all the adult stuff happened.